THE POLAR MUSIC AWARD 2015 in Stockholm

June 9th, 2015 at the price ceremony of THE POLAR MUSIC AWARD 2015 in Stockholm, there will be a gala dinner where also the royal family will attend.
The dinner will be broadcasted live in national television.  At the dinner the Braida Brachetto d’ Acqui will be served with the dessert. 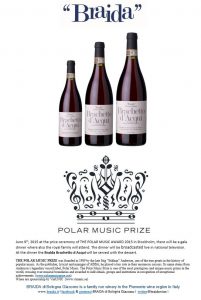 THE POLAR MUSIC PRIZE was founded in 1989 by the late Stig ”Stikkan” Anderson, one of the true greats in the history of popular music. As the publisher, lyricist and manager of ABBA, he played a key role in their enormous success. Its name stems from Anderson´s legendary record label, Polar Music. The Polar Music Prize is one of the most prestigious and unique music prizes in the world, crossing over musical boundaries and awarded to individuals, groups and institutions in recognition of exceptional achievements. (www.polarmusicprize.org).