The most famous barrique-aged Barbera 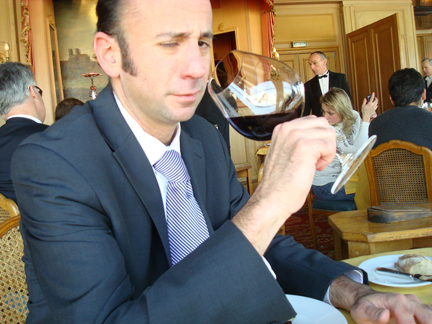 I was geeked to ask Maurizio (Zanella) about the now legendary trip he made with Luigi Veronelli to California in 1981: Veronelli wrote 1982, but Maurizio told me 1981 last night).

“The real reason behind the trip,” Maurizio said, “was that [the great Friulian winemaker] Mario Schiopetto was suffering from back problems and had to go to Minneapolis to visit a specialist doctor. So, we decided to go with him and help him and from there we decided to California. We got off the plane in Los Angeles and headed right to Spago on Sunset Blvd. When the waiter took our order, I told him that we wanted ‘every thing on the menu.’ There were only four of us. So, Wolf[gang Puck] came out and said who are these guys? We ended up eating everything on the menu and Wolf and have been friends ever since. We asked him which was the best restaurant in Los Angeles and he sent us to Piero [Selvaggio] of Valentino. And it was Piero who organized our trip to visit all the great Napa valley wineries. I was completely amazed by the fact that the Californians were using the same winemaking practices that I studied in France [in Burgundy and then in Bordeaux]. I went back to Ca’ del Bosco and changed everything.”

Giacomo Bologna was with them, too. Bologna returned and created Bricco dell’Uccellone — probably the first and definitely the most famous barrique-aged Barbera.