New post from Grapes to Wine’s Blog – Visit at Braida…

I went to Piedmont at the beginning of September and spent four lovely days touring the gorgeous region, tasting wines and visiting a few wineries. I arrived to Bergamo on a FRI morning and drove towards La Morra where my accommodation was. As Braida is in Rocchetta Tanaro which is on the way to La Morra, this was the first winery visited. I met Mrs Raffaella Bologna during this year’s edition of Vinitaly and during our conversation she mentioned how happy she was with her Romanian employees that were not doing just the hard labor, but also were involved in the wine-making process. So when I wrote her that I will come to Piedmont, she immediately scheduled my visit to her winery. She even went the extra mile and invited me to have a family lunch at her residence.

Braida is a beautiful village story: It all began, just as in any village story, with a nickname: Braida, which Giuseppe Bologna earned whilst playing pallapugno, a traditional Italian ball game played with bandaged wrists in teams of four. His son, Giacomo Bologna inherited both his father’s vineyard and his nickname, and the unconditional love for his land and wine.

In charge of the property are now Giacomo’s children: Raffaella and Beppe. Braida is producing the most famous and probably the best Barbera d’Asti: Bricco dell’Uccellone. Until the late Giacomo Bologna stunned critics and connaiseurs alike, his barriques aged single vineyard Bricco dell’Uccellone, Barbera d’Asti was considered as merely the coarse, everyday dinner companion for many northwestern Italians. While studying the techniques of the best French winemakers in the late ’70s, Mr Giacomo Bologna learned how malolactic fermentation in wood could soften Barbera’s strident acidity and add tannins that the grape inherently lacks. He realized that, if used wisely, barriques would not only add subtle flavors to Barbera, but also polish its rustic edges. 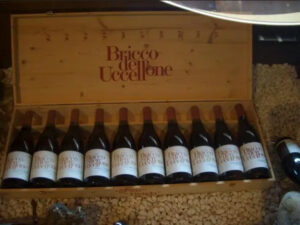