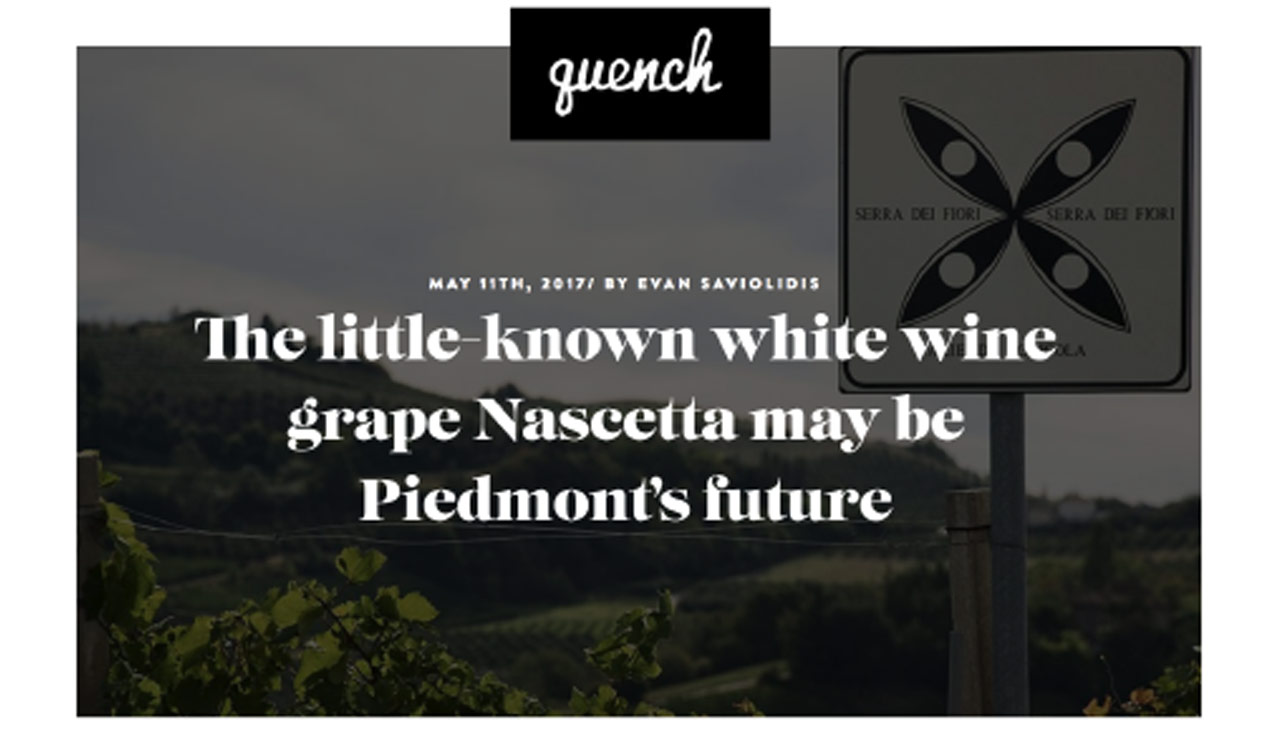 Move over Arneis. Step aside Gavi. Erbaluce, exit stage left. Moscato, God bless your sweet and bubbly personality. I have seen the future of Piedmontese white grapes — and its name is Nascetta.

After 20 years in the wine business, I have seen and heard “Next Big Thing” applied to countless grapes and wines. So many, in fact, that my vinous blood pressure stopped exceeding 120 over 80 a long time ago, since the majority of those canonizations never materialized. So when I say that there is something special spreading through the Langhe Hills of Italy, it’s with deep sincerity.

The white varietal Nascetta was first documented more than 140 years ago. Originally from the town of Novello, next door to Barolo, it is the only indigenous white grape from the Langhe, since Arneis comes from Roero and Cortese (the grape of Gavi) originates from Alessandria.

The name “Nascetta” was coined by Giovanni Gagna, a 19th-century Piedmontese oenologist. Erroneously, he believed that the grape was related to the Sardinian grape Nascu (meaning “moss”). For the better part of the 18th and 19th centuries, Piedmont and Sardinia were part of the Duchy of Savoy and later the Kingdom of Sardinia. With the seat of power located in Turin, trade between Sardinia and Piedmont was commonplace.

The producers of the day held Nascetta in high esteem because it produced concentrated and full-bodied whites. However, post-phylloxera, only a few parcels of the grape were planted, and in the aftermath of World War II, when the mandate was to expand all forms of agriculture to nourish the masses, Nascetta almost disappeared when growers decided to turn their sights to high-yielding varietals, such as Cortese. To put it in perspective, Cortese can easily yield 100 bottles of wine from 100 kilos of grapes. By contrast, Nascetta, in a good year, will only produce 40 bottles. It’s the passion of a handful of producers that staved off its complete extinction.

Nascetta’s re-emergence in the modern era dates to 1990, when the first new vineyard plantings began under the guidance of Giacamo and Raffaella Bologna, owners of the famed Braida Winery, which was also the first to introduce the world to the concept of premium Barbera. Low yielding and judiciously oaked, this style has now been copied by most Barbera producers, to world acclaim.

So, what does Nascetta taste like? Well, if Grüner Veltliner and Assyrtiko were to have a love child that was subsequently baptized by Chenin Blanc, it would be Nascetta. Its personality ranges from the pepper/herbal/citrus qualities (think Kamptal G.V.) in lighter versions to full-blown tropical styles (such as Wachau Smaragd) in riper renditions. All versions have a crunchy saline/crystalline minerality, classic to the Santorini varietal. With age, they tend to take on a Chenin quality with wet wool and apple. The other hallmark of the Nascetta grape is that it is extremely resistant to oxidation. Leave a bottle open for a few days and there will be no adverse effects. DNA testing is still ongoing, but as it stands right now, it is a singular grape with no known relations.

Regarding vinification, it is pretty much open season. Producers are still trying to figure out which methods  work best. Some employ stainless steel , others old wood and a small percentage are experimenting with new French oak in varying degrees. Skin maceration and reductive winemaking are among some of the other techniques used. For me, the finest interpretations were the ones without new wood, which allowed the purity of the grape to shine.

As for aging, many believe that the best Nascettas will last for upwards of a decade. Part of the reason is because the wine’s malic and tartaric acids are very stable, and have high potential alcohol. However, the track record is still limited, so no one really knows, but the older vintages I sampled were holding the line quite nicely.

Friends, this is a grape with which you need to become more familiar, as its stature and demand will only continue to grow in the coming years. Below is a selection of wines I tasted at this year’s inaugural Associazione Indigenous Langa tasting in Alba. Out of the 25 wines I sampled, many scored high — an indication of the overall quality that this varietal can produce. As for price, in Italian enotecas, these wines range between 6 and 15 euros. With Piedmont known for big reds, isn’t it time that a big white joined the echelon?

A lot is going on in the glass: peach, olive oil, honey, lime zest, mineral, white flower and white pepper. On the lips, there is very good length with citrus and herb echoing all the while.