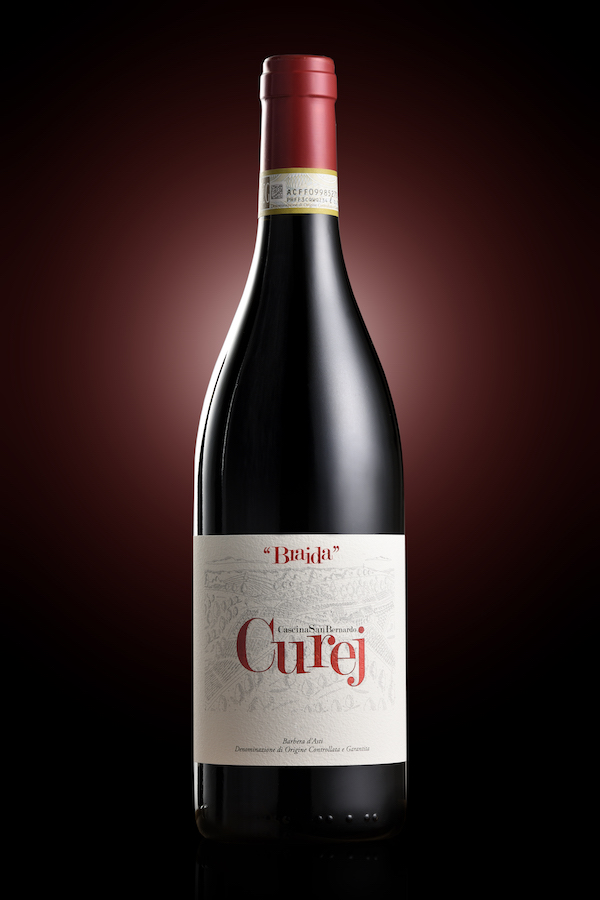 We want this land to say: Barbera. This is what we always used to think when we looked, a few years ago, towards Asinara hill.

We wanted our visitors to have the chance to experience a unique and memorable tasting, in a natural setting characterised by vineyards, woods and meadows.  And this is why we purchased and renovated the San Bernardo property, now home to the  Braida Wine Resort.

An analysis of the soils confirmed that our goals were justified: the altitude of the Asinara ridge and its constant ventilation favour the growth of healthy grapes. So we surrounded the Resort with Barbera vines.

Our respect for this land has compelled us to make the most of it, encouraging its fullest and most sincere authenticity: the resulting wine – the first vintage being 2019, released in 8,000 bottles – is labelled “Curej”, which is the nickname of the families that have always lived in and looked after a tiny part of Rocchetta Tanaro, where monks were already practising viticulture way back in the eighteenth century.

According to some people, the term curej could originate from cureja, meaning a trouser belt or the long belt used in machinery for threshing grain. Others think it could stem from gurej, or gorreti, which are the wild shrubs that grow along the river Tanaro, used to make baskets.

Whatever… Curej is Braida’s new Barbera d’Asti Docg. Its origins are in the name, and its bouquet and palate are reminiscent of the view from the Wine Resort: open, immense, simple, happy.

A Barbera that is born young and fresh, evolving with four months in large barrels, to which bottle ageing conveys drinkability, enhancing the primary aromas.

A new Barbera is born, coinciding with Braida’s 60th harvest, alongside Braida’s other expressions of Barbera:  La Monella, Barbera del Monferrato frizzante and the reserves Montebruna, Bricco dell’Uccellone, Bricco della Bigotta and Ai Suma. Barbera is in our DNA, and it is without doubt the grape variety that best identifies Braida in the world.

We want this land to say: “Barbera”. That’s what we’ve always thought, ever since those first vineyards were left by grandfather Giuseppe left to our father Giacomo, where the grapes were cultivated for La Monella. Then those between Rocchetta and Belveglio, the vineyards of Bricco dell’Uccellone, which our mother Anna brought as her dowry; and the vineyards of Montebruna, which we bought and put together, and still look at today with great pride.

Braida is Barbera and, with Curej, this is even truer.