There are wines that you fall in love with the very first time you taste them. That you never forget. That go down in history. Wines that actually succeed, somehow, in shaping history.
And this is the case of Braida’s Bricco dell’Uccellone, first harvested in 1982, exactly 40 years ago.

At a time when Barbera was regarded as a grape-variety of little prestige, trailblazer Giacomo Bologna reinterpreted the potential of this grape with a view to modernity and internationality.
Giacomo knew how to think big: his recipe was based on the selection of crus, much lower yields than usual and the ageing of the wine in French oak barriques to give it elegance and structure. These were the tools that were key to reclaiming dignity and lending new emphasis to one of Piedmont’s most important grape varieties, launching a revolutionary phase for Barbera that was soon emulated by many other winemakers.

Three years after the first harvest, when this bottle, labelled as “table wine” at the time, was released onto the market, its success was overwhelming. The acknowledgements of Bricco dell’Uccellone began to pour in immediately, so much so that the English journalist Jancis Robinson, in her Oxford Companion to Wine, under the heading Barbera wrote: “The man who first put Barbera on a pedestal, proving that it was a serious wine, was Giacomo Bologna of the Braida winery, whose Bricco dell’Uccellone was the first Barbera to be sold internationally”.
To seal this journey, Braida’s Bricco dell’Uccellone Braida received the “Wein Legende” award at Bensberg Castle in Cologne in 2019. It was the first wine from Piedmont to be listed in the hall of fame of the world’s most important wines and the third Italian wine, along with Ornellaia and Sassicaia.

The first 2022 bunch of this Barbera will be cut in a few days’ time.
A new challenge, according to Giuseppe Bologna: “Since taking over full responsibility for production at the winery in 1994, I have seen some strange vintages… This one is certainly unparalleled, a historic vintage but without any applicable historical references: a whole range of brand-new emotions”.
We’ll discover its value in the glass in three years’ time.

Meanwhile, the overview of all the vintages on the market so far (up to 2019) is impressive. 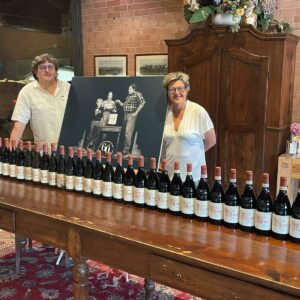 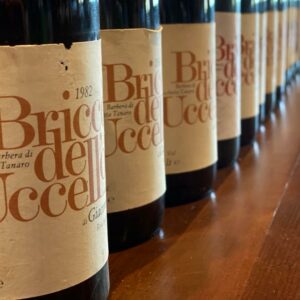