The cook book “ Die Oper kockt” will be released on August 5 in Schloß Leopoldskron in cooperation with the Salzburg Festival with a cooking charity event for 160 guests, the ticket cost 300 Euro. The menue is created by the „chefs“ Anna Netrebko, Ferruccio Furlanetto, René Pape, Barbara Bonney, Joyce DiDonato, Piotr Beczala and Aleksandra Kurzak, they all perform this summer at the Salzburg Festival in different opera productions.  Every singer gets a chef to prepare the menue not only intime. High decorated chefs from Austria, Germany and Switzerland will support the operastars and SOS Kinderdorf gets the charity amount for the youth project: „Clearing House“ in Salzburg.

The motto event: “Cooking, eating and drinking bring people together”. Major print and TV media coverage can be counted on.

Anna Netrebko ( www.annanetrebko.com)  is a russian soprano . She worked scrubbing floors at the famed Mariinsky Theatre in St. Petersburg but later reigned there as a diva. Ms. Netrebko first dazzled audiences with her voice and beauty in 1994 when they cast her in Mozart’s “Le Nozze de Figaro.” In Europe she enjoys a pop-star status. Her 2004 DVD of arias and interviews, “Anna Netrebko: The Woman, The Voice,” outsold DVDs released that year by Britney Spears and Beyoncé Knowles. Ms. Netrebko, born September 18, 1971, grew up during the Cold War, the daughter of one of the country’s leading geologists and a telephone engineer. Ms. Netrebko is now an Austrian citizen living in Vienna. She and her fiancé, Uruguayan-born baritone Erwin Schrott, have a son.

AI SUMA Barbera d’Asti 2007 from Braida winery (www.braida.it)  is among the most important longevity Barberas,. It is produced from a late harvest of 100% Barbera grapes. It is refined in barriques for 12 months, Ai Suma has a wonderful intense ruby-red colour with garnet reflections; it has a rounded, rich and complex nose with wild fruit notes and hints of vanilla, liquorice and cocoa. It has a well-structured, full-bodied powerful flavour which is nevertheless elegant and sensual, balanced and most persistent. 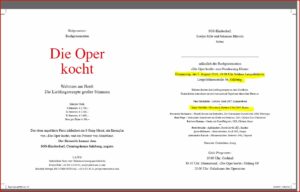