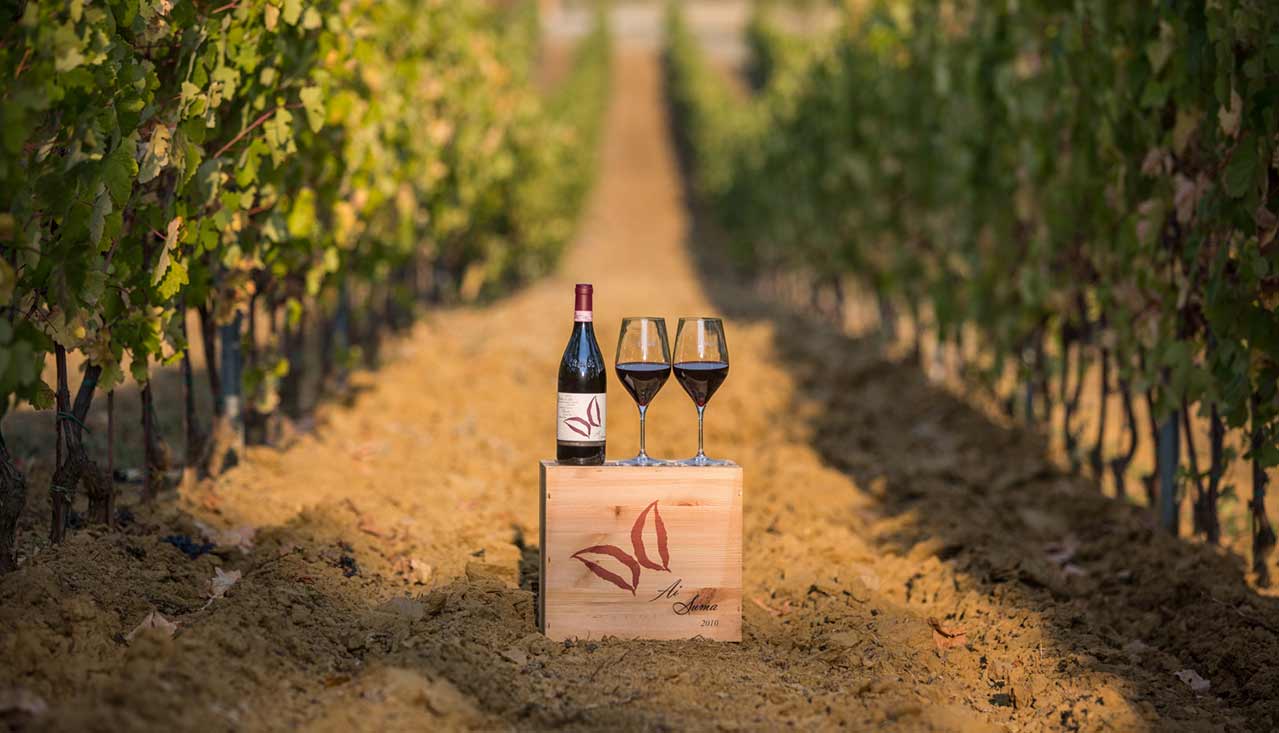 A long-awaited return: Ai Suma 2015, the Barbera d’Asti Docg reserve that represents the height of production by the Braida cellar in Rocchetta Tanaro (Asti), will be at Vinitaly in Verona from 15 to 18 April 2018 in Stand N4 in Pavilion 10 Piemonte.

A wine made only in excellent years, and a beautiful story that speaks of oenological expertise, the tenacity of the Monferrato people and the value of friendship.

In the spring of 1989, Giacomo Bologna had taken a trip with Luigi Veronelli to Georgia, the c-land that represents the historical cradle of winegrowing, and the following autumn, he had invited a delegation of Georigians to Piedmont to exchange their hospitality.
They were expected to arrive at the beginning of October but their visit was delayed until just after the middle of the month.

Ignoring every else’s opinion, including that of his oenologist, Giacomo waited for the arrival of his guests, so that he could pick the best grapes from one of the vineyards with them. Thin, deep purple skins: Giacomo was convinced he was right. He said that if the market didn’t understand the wine that would be made from this late harvest, then he’d drink it all himself.

The harvest finally went ahead on the 16th of October. That same evening, Giacomo Bologna crushed the grapes with his Soviet friends.

“Kaumar gioss”: the toasts raised that evening in Rocchetta Tanaro were in Georgian.

“Ai Suma!”, “we did it!” exclaimed an excited Giacomo Bologna when he tasted the wine that had spent six months in French oak casks.

A new Braida Barbera was born.

“Superb Barbera to be tasted with devotion, because the wine is filled with moving memories” wrote Riccardo Riccardi, count of Santa Maria di Mongrando, on the first back label of Ai Suma.

That last masterpiece was supposed to be called Bricco Georgia, but when it was ready for sale Giacomo had passed away and his children Raffaella and Giuseppe Bologna decided to link it with the expression of satisfaction used by their father the first time he’d tasted this wine.

The label that has always graced Ai Suma is inspired by a family photo, a snapshot in which Giacomo Bologna is smiling at his wife Anna Martinengo.

The smile was chosen for Ai Suma. Duplicated and arranged to form a butterfly, that smile goes beyond the local dialect, beyond language, to convey the real meaning of the expression “Ai Suma”. Almost a seal, a red wax imprint: the smile on the label represents the seal of the winegrower that accompanies his wine.

To celebrate the return of Ai Suma, Braida will be collecting stories of the successes and goals achieved, on the social networks.
When did you say “Ai Suma”, we did it? Whoever remembers a success story can share it with a tweet, a post on Facebook or a picture on Instagram with the hashtags #AiSuma and #BraidaWines.

Not just Ai Suma. Visitors to Vinitaly can taste the 2017 vintage of the young reds, La Monella and Limonte, the whites of Serra dei Fiori Il Fiore, La Regina and Re di Fiori, and the aromatic Moscato d’Asti Vigna Senza Nome and Brachetto d’Acqui.
Montebruna and Il Bacialè will be available for tasting in the 2016 vintage, like the reserves, Bricco dell’Uccellone and Bricco della Bigotta.

Here are some details, wine by wine:

We used beautiful grapes to make a particularly rich Barbera. The yield was lower than in previous years, the bouquet is intense, the structure fleshy and the persistence excellent.

Hot weather favoured the ripening of the seeds and consequently the natural tannin of the Grignolino, which is never aggressive in Limonte. Colour and bouquet are both intense, with a slightly spicy and fruity aroma. Immediately rewarding.

The bouquet of an exceptional vintage rises up from the glass, characterised by the richness and elegance of highly refined spice. A full and deep palate.

Our Bigotta 2016 is a successful combination of a cold, mineral part and a warm, fleshy part. Fine spice, olfactory compactness, excellent definition. A very appealing syrupy note fills the nose and the mouth.

The great power of this vintage gushes out forcefully. The intriguing nose keeps all of its promises in the mouth, with lingering persistency.

All the elegance and concentration typical of the 2015 vintage: saline, balsamic notes, well-harmonised tanginess and alcohol, with tannins that are neither too bitter nor too sweet, but just right.

A rich and very intense bouquet and a smooth, graceful palate, characterised by excellent persistency.

The vintage has given the wine great intensity and a broad aromatic spectrum, together with a rich body that never cloys.

The Serra dei Fiori Estate was created in 1988, in Trezzo Tinella. The vineyards are just a few kilometres from Barbaresco and Alba, but in that harsher strip of Langa between steep hills and woods, at an altitude of 450 metres above sea level.

It is here that the Braida white wine project first saw the light, budding from a partnership between our family and brothers Renzo and Valerio Giacosa, guided by professor of viticulture and oenology Roberto Macaluso.

In 2017, the vineyards in the Alta Langa district responded well to the very hot summer: the altitude, easterly exposure and nocturnal drops in temperature protected the grapes against the scorching heat.

The resulting wines are whites that have all the temperament of the men and women of this area, declared World Heritage by UNESCO.

The Nascetta grape’s fruity aroma matured very well and the wine expresses sensations of fullness with an interesting acidity In the glass, the bouquet is exactly what you’d expect from special occasions, floral, fruity and intense, reminiscent of honey with an interesting mineral note; the texture of the palate offers a preview of freshness, tartness and lasting fragrance.

Made from grapes harvested when the days were sunny and the nights cool. The bouquet features citrus and tropical fruits, while the palate is alive, vibrantly acidic and smooth.

A moving mouthfeel, with the austere yet elegant sensory profile revealing the DNA of the Barbera and the essence of Bricco dell’Uccellone. Alcohol content – 44°.

To book an appointment in Verona, please write to info@braida.it