These quintessential food wines star in a region of the world with an affection, even reverence, for the marriage of dining and the vine.

Grab a table at any informal trattoria or family-run osteria at the heart of the Langhe, the gracefully hilly area that includes the towns of Barolo and Barbaresco in northern Italy, and chances are you won’t be served the noble reds that have made this Italy’s most celebrated wine territory. Chances are, you’ll be served Barbera or Dolcetto.

If Barolo and Barbaresco, two expensive, compelling and elegant wines made from the Nebbiolo grape and carefully cellar-aged for long periods, are the wine equivalent of Piedmont’s Sunday best (dress slacks, cufflinks and formal jacket), Barbera and Dolcetto are its favorite used jeans and comfy sweater. There are many reasons why these bright, fruit-forward red wines enjoy a special, intuitive connection to the people who drink them. Here are three: they offer an affordable alternative to the pricier bottles of Northern Italy; they come from a long and storied tradition that makes them two of the most distinctive indigenous expressions produced; and they exhibit natural characteristics that make them quintessential food pairing wines—cultivated in a part of the world that dedicates particular affections to its foods.

“Barbera is our everyday food wine thanks to the high acidity that cleans the palate,” says Michele Chiarlo, whose Barbera Le Orme is a market leader in the United States “Dolcetto has sweet fruit and more tannins that refresh the mouth.”

“These are the wines we grew up with,” says Raffaella Bologna. “They accompany all our family moments, anniversaries and celebrations as ever-present bottles standing on the kitchen table.” Bologna is seated at a corner table by a large window streaming sunlight at her uncle’s Trattoria i Bologna in Rocchetta Tanaro in the province of Asti. Her late father, Giacomo Bologna of the Braida estate, is credited with inventing modern Barbera when he became one of the first to age the wine in oak barrique in 1982.  In front of her are a bottle of Barbera Bricco dell’Uccellone, the wine that made her father famous, and a plate of agnolotti (square-shaped pasta filled with rabbit, veal and pork) that keeps uncle Beppe famous.

But let’s resist the seductive charms of an Italian trattoria for now. What role can these wines play on American tables? Barbera and Dolcetto (whose name means “little sweet one”) exhibit enormous versatility in winemaking styles and trends stemming from the type of oak used: barrique for stronger, spicier flavors; botte, or larger oak casks, for less wood influence; stainless steel or even cement for fruitiness. This inherent flexibility is what makes these wines so well suited to American cuisine, which borrows flavors, spices and cooking techniques from so many points on the globe.

These powerful reds and champion food companions are generally less known outside Italy. Here are profiles within the context of their food pairing potential, specific to the types of foods enjoyed most by American wine devotees.

Barbera Of the two grapes, Barbera is arguably the most flexible. It is marked by high, sometimes sharp, acidity, lower tannins and abundant fresh berry and black fruit aromas. There is heated debate among producers about how far to go to soften its naturally high acidity; it is the acidity that makes Barbera one of the world’s most food-friendly wines because the freshness cuts straight through the fatty component found in the dishes many of us most enjoy.

The people of Piedmont certainly love the acidity; their delicious pasta dishes and impressive range of local cheese almost seem purposely crafted to match their favorite drinking wine. Foreign markets appreciate acidity less and therefore some producers have started to experiment with various pruning methods, oak aging regimes, late harvests or even appassimento (air-drying the grapes) in order to tame that aggressive freshness and offer softer, more velvety wines. What is experimentation to some is seen as excessive interventionism to others: “Acidity is a problem for Barbera,” admits enologist Vincenzo Gerbi, who heads the Hastae project in which six producers (Braida, Michele Chiarlo, Coppo, Prunotto, Vietti and the grappa maker Berta) banded together in 1996 to create an experimental wine, Quorum. “It’s also an incredibly flexible variety and that acidity can be reduced.”

Like it or not, most successful food and wine pairings require acidity. Take any dish that starts with butter: the palate needs crispness to counter the fattiness, unctuousness and heaviness of these foods. The same is true of olive oil-based Mediterranean cuisine and recipes that rely on mayonnaise or one on the so-called “mother sauces” such as béchamel, hollandaise or velouté. Think of breaded veal scallops with clarified butter, langoustine bisque with crème fraîche, medallions of lamb with garlic cream sauce, sirloin steak with green peppercorns and heavy cream, leek pie with Gruyère cheese or grated parmigiano; soufflés, or savory crêpes with smoked salmon. The palate needs something refreshing and crisp between each fatty bite.

Cooking styles such as roasting, poaching and deep frying also result in dishes that can be paired with a high-acid wine like Barbera. Roasting cooks with dry heat, thus searing the skin and forming a crispy outside. The fatty juices flow into the center of the roast. Breaded dishes like veal scallopini or zucchini gratin also have extra fat absorbed within their crusts.  Barbera is a wine with good aging potential. The principal growing areas are Barbera d’Asti, Barbera d’Asti from the Nizza subzone, Barbera del Monferrato where the grape is believed to have originated, and Barbera d’Alba. These wines are also available in a superiore version released later. Abroad, it is found in Australia, California and Argentina, where it traveled with Italian immigrants.

Dolcetto Dolcetto is the easier, more fruit-forward wine with less aging potential; it is usually consumed within a year or two of release. As opposed to Barbera, it is marked by low acidity. Its food friendliness comes from its natural fruitiness and drying tannins. In fact, these two qualities tend to balance sweeter foods, fragrant foods (with tomato sauces or perfumed herbs, for example) and foods with a fatty component, which is broken down by the tannins. If you are looking for a pairing partner to a steaming pizza pie with mozzarella and basil, or a home cooked plate of pasta, look no further than Dolcetto.

A pulpy, purplish appearance and bright aromas of wild berry, blueberry and fresh plum characterize the wine. It is thick and generous in the mouth and that natural heft is pushed along the palate by the polished tannins. It comes from many locations, and the most popular include Dolcetto di Dogliani, Dolcetto d’Acqui, Dolcetto d’Alba, Dolcetto d’Asti and Dolcetto di Diano d’Alba in Piedmont.  Pair it with cold cuts such as smoked sweet ham and salami dotted with black peppercorn, garlic and fatty particles. The aromatic qualities of these foods are accented by the fruitiness of the grape. Bruschetta with cream of green olive, or basil, chopped tomato and garlic also make a good companion. Dolcetto works very well with exotic appetizers such as herb and vegetable-stuffed spring rolls, Indian samosas with potato and sweet peas, curry or Tandoori dishes, or Caribbean curried pork with banana and coconut.

What do the Piemontesi suggest you pair with Barbera and Dolcetto? We asked six wine producers, each with his or her link to the food world either through a restaurant or agriturismo, to pair their wine with their favorite local dish.

Producer: Accornero (accornerovini.it)  Wine: Accornero 2008 Giulin Barbera del Monferrato (50% aged in oak tonneaux and the rest in stainless steel for six-eight months) Dish: Tajarin (thin tagliolini-like pasta) with ragù made with sausage from Bra.  “Barbera is made to express all of its fruit aromas and it is an easy-drinking wine that works with the fatty component in foods, such as the eggs used in the pasta, or the butter and the sausage in the ragù.” —Giulio Accornero

Producer: Cavallotto (cavallotto.com)  Wine: Cavallotto 2008 Vigna Scot Dolcetto d’Alba (aged in stainless steel and cement)  Dish: Cold cuts, especially aged salami with strong flavors of garlic and black pepper.  “The fresh fruit aromas of Dolcetto aged in stainless steel work with the natural fragrances of the salami. Our tradition pairs this wine with spicy features such as garlic or pepper, but outside Piedmont the wine is perfect with a classic pizza.” —Alfio Cavallotto

Producer: Villa Sparina, Ristorante La Gallina (monterotondoresort.com/villasparina)  Wine: Villa Sparina 2006 Barbera del Monferrato (20% is aged in stainless steel and 80% in barrique for 12 months)  Dish: Tortelli di gallina in consommé (chicken tortelli in broth)  “The tortelli are served in deep dishes and steaming broth is added as served in front of the guest. We also add rolled balls of raw veal that cook instantly in the hot broth. This pairing is based on the contrast of the delicate flavors in the dish and the fruity tones of the Barbera.” —Marco Franchi, sommelier

Producer: Bondi (bondivini.it), La Locanda dell’Olmo  Wine: 2008 Bondi D’Uien Dolcetto D’Ovada Superiore (40-year-old vines and the wine is aged in stainless steel for 10 months)  Dish: Corzetti (pasta shaped with wood forms) with mushroom and sausage ragù “This is a traditional dish found in the lower parts of Piedmont that uses decorated wooden forms to shape the pasta. It’s a classic fall dish with porcini mushrooms and pork sausage. That touch of tannin in the Dolcetto works with the fattiness of the sauce.” —Andrea Bondi 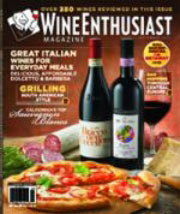